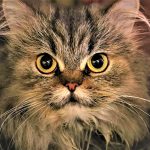 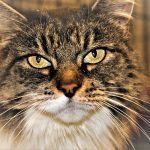 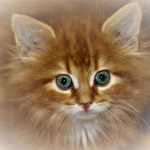 Undoubtedly cats have some of the most unique eyes in the animal world; instead of having circular pupils like humans, the black part in the center of their eyes are vertical. Research has shown that the thin, slitted pupils of domesticated house cats (as well as other predatory animals) allow for a wider range of muscle movements and for more light to enter the eye.

Through years of involvement in cat rescue I have come to realize, like many other physical characteristics of the cat, his/her moods are reflected in the eyes. Pupil changes will give clues: an angry cat will display narrow pupils, an excited or frightened cat will have eyes wide open with large pupils, while a happy, peaceful, mellowed-out cat's eyes will appear a shade darker than normal.