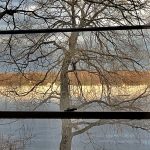 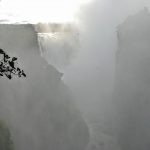 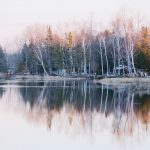 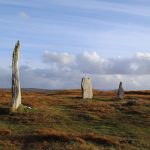 These photographs were selected from recent works of Dianne Lister and Michael Harris because they directly address, in different ways, the challenge of creating or flattening depth in landscape photos.

When successfully captured, that range of depth — those different visual planes — make the pictures, and the landscapes they portray, more alive and more engaging.

DIANNE LISTER
Dianne Lister has exhibited her work in solo and group shows since 1995. Her first major show was an exhibition of 20 silver gelatin prints as part of CONTACT Photo Festival (1999). A second CONTACT show was held in 2013 in collaboration with Janet Dey (“Montana, an Altered State”) at Balzac’s Gallery, Toronto. In 2018, Dianne was invited to exhibit “The Travelling Blue Dress Project” at the Kawartha Art Gallery as part of SPARK Photo Festival 2018 (March – April 2018). Dianne’s photographs have been selected as part of the Kawartha Art Gallery’s Community Members Juried Exhibition (2017, 2018, 2019). In September 2019, two of Dianne’s photographs were selected for the juried exhibit, “Trees,” held at the Colborne Street Gallery, Fenelon Falls. Her current project – “Mind the Great Divide” - is a mixed media/video/photographic installation collaboration with Janet Dey which will run May 9 – June 21, 2020 at the Art Gallery of Peterborough.

MICHAEL HARRIS
A retired media executive, Michael has served on many Toronto and Peterborough not-for- profit boards. He is currently on the board of the SPARK Photo Festival, Canada’s largest regional photography festival. Michael has exhibited with Dianne Lister in five curated SPARK exhibitions, including “Swept Clear” (2014), “Laid Bare” (2015) “Sight Unseen” (2017), “Almost Blue” (2018) and “Apparent Horizon” (2019). Michael’s photographs have been selected by the Kawartha Art Gallery for its Community Members Juried Exhibition (2018, 2019) and in 2019 he won the award for “Best Content” (“Victoria Falls, 2019”). In September 2019, three of Michael’s photographs were selected for the juried exhibit, “Trees,” held at the Colborne Street Gallery, Fenelon Falls. His works are held in several private collections.