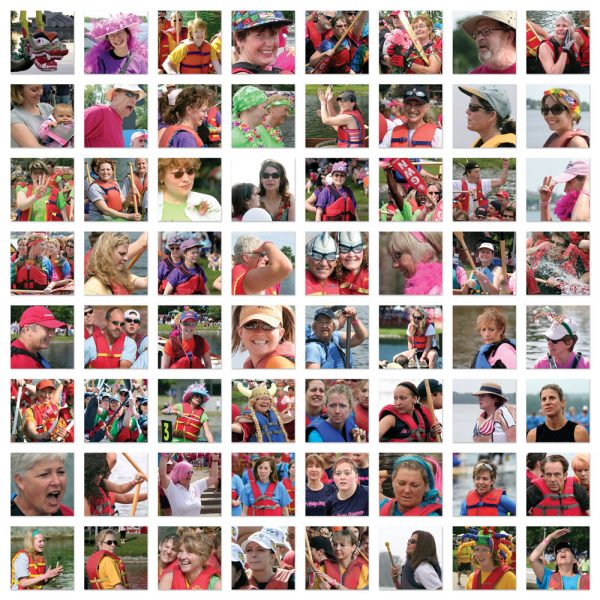 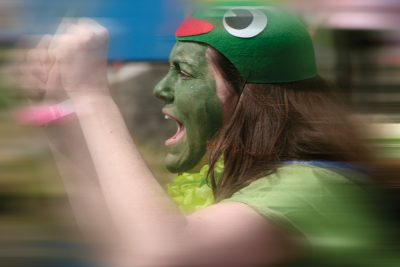 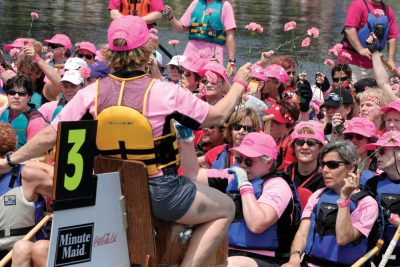 The sounds of another Dragon Boat Festival Peterborough – and for many over the past 20 years – an unofficial raucous start of another summer in the city. Each year since 2001, an average of 1,400 dragon boat paddlers decked out in every possible coloured team T-shirt, spandex, and many strange accessories race their hearts out for a common cause.

Dragon boating ... it’s fun, intense, joyful, team building, and addictive. And one of the most successful community-based fundraising events in the area. The hundreds of teams that have thrashed to the finish line on Little Lake have helped raise more than $3.6 million to to help purchase some of medical science’s best breast cancer diagnostic and screening equipment for the PRHC.

The total support from the entire community – volunteers, sponsors, donors, team captains and their paddlers, the City, and nearby residents – always amazes festival organizers.

Speaking of amazing support, Kawartha Credit Union has shown its deep commitment to the well-being of the community it serves by signing up as the festival’s platinum sponsor every year since 2002.

It started small – 32 teams. Then it got bigger. And bigger. What hasn’t changed: the cheering, the high-fives, the soakings from splashing paddles, the laughing, the groans from 60 or more paddle strokes a minute, the congratulatory yells (“Look at our race time!”) … and also the vows to do better next year. You’ll hear it all at the races. And the crowd-watching is great.

Overseeing everything and playing host is Survivors Abreast, the hometown breast cancer survivor dragon boat team. But running a festival “takes a village.” Together with Survivors Abreast, a full committee of volunteers from the community makes the festival happen every year.

And they take great care in presenting the traditional carnation ceremony. It’s the highlight of the one-day event, dedicated to those who we’ve lost and those who are still challenged by breast cancer. Tears are shed. The survivor teams and spectators resume hope and the races continue. Awards are handed out and there are more cheers.

Curator’s Notes
I was blessed with having amazing individuals assist in the realization of this exhibit. Their energy and devotion to telling the story was nothing short of awe inspiring.

To begin with, I would like to thank Michelle Thorton who in a “what if...?” moment, somewhat exhausted after a long race day at PDBF in 2019 and perhaps not thinking clearly, came up with the idea for this exhibit.

A shout out to Wayne and Carol Mutton for their gargantuan assistance with sharpening my editing selection pencil to arrive at the exhibit you will see today. Even after the selection was whittled down to roughly 1200 images from the over 20,000 in the archives, the final exhibit had to tell this 20 year story in as concise a manner as budget and space would allow.

Heartfelt gratitude must also be extended to Gina Lee, a living angel, who against the odds, and a newbie in the cut-throat world of fundraising, pulled together all the sponsors, donors, GIK, without which this exhibit would have been a moon shot that never got off the ground. Gina was also juggling her new role as the new Chair of PDBF, so extra kudos for taking this on with such positive enthusiasm.

Jennifer MacKenzie from SPARK, and Karen Beamish from PDBF, are thanked in advance for planning the exhibit reception. It will be a reception to remember.

Jennifer and Gina, who are both new in their respective leadership roles in their organizations, will host the reception.

Finally, thank you to the SPARK Board for recognizing and supporting this exhibit as worthy of the Showcase Exhibit distinction. I hope the exhibit will live up to and honour the traditions of excellence that the Showcase represents.

As remembered through the images of multiple volunteer photographers, the 2020 SPARK Showcase Exhibit is a photographic journey back in time through the history of Peterborough’s Dragon Boat Festival.